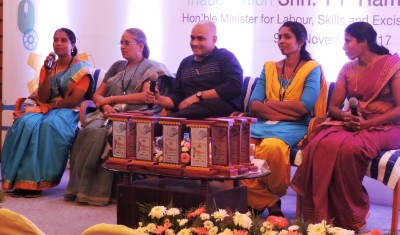 Kudumbashree Women made scintillating performance by sharing their incomparable yet inspiring success stories at a programme organised by Kerala Academy for Skills Excellence (KASE) associating with Kudumbashree Mission and Industry Training Department at Mascot Hotel Thiruvananthapuram on 9 November 2017.

4 Kudumbashree Women who had 'harvested' success by starting Micro Enterprise units shared their experiences during the programme. Smt J. Sandhya of K.M food products, Attingal, Smt M.V Bhageerathi of Ammu Food products, Palakkad , Smt. Bindu Aji of Animal birth Control unit, Pathanamthitta and Smt Sindhu Balan of Kudumbashree Matrimony, Thrissur shared their experiences of overcoming the hurdles they faced while attempting an innovative initiative and how they became successful entrepreneurs today. These 4 women had became the centre of attraction of the programme. 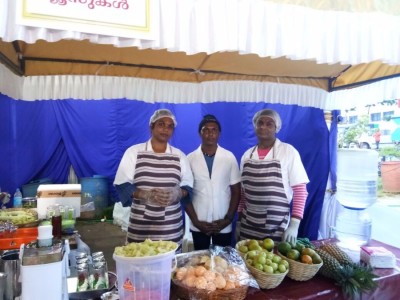 The Juice centre put up by transgenders at 'Kozhikkodan Ruchikkoot' Cafe Kudumbashree food fest held at Kozhikode beach from 3-12 November 2017 attracts many. Kudumbashree had formed special NHGs for finding livelihoods for them.Kudumbashree Kozhikode District Mission had given them training on ethnic juice making with the help of Kudumbashree training institution. Satheesh alias Monisha, Jacky alias Jasmine, Shamsu alias Shamna are the micro entrepreneurs behind the juice stall. The honey berry juice, green berry, carrot berry, beet berry, musambi, orange and pineapple juices prepared by them are of high demand at the food fest.The food lovers of Kozhikode is giving a warm welcome and good support to them. Kudumbashree Mission is feeling content in helping them to find a space of their own in the society. By helping them finding livelihoods of their own Kudumbashree envisions the upliftment of transgenders in the society. 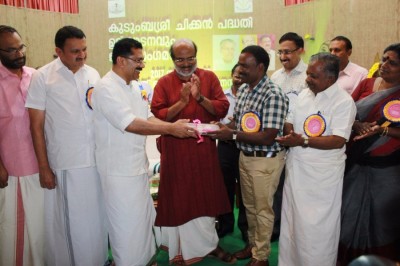 Kudumbashree Chicken, the broiler chicken nurturing programme initiated by Kudumbashree Mission in association with Government of Kerala, Animal Husbandry Department & KEPCO was launched by Dr T.M Thomas Issac, Minister of Finance, Government of Kerala at Kanakakunnu Palace, Thiruvananthapuram on 8 November 2017. " It's the continuation of the timely intervention of Kudumbashree Mission in Agriculture and Animal Husbandry Sector" Minister said.

"Kudumbashree Mission had always ensured the participation of women from all sectors of the society and had played a major role in the social upliftment of the women who were sidelined in the society." He added.

Through this programme Kudumbashree envisions the self sufficiency of the state by producing milk, eggs and meat of our own. It is planned to start 5000 Kudumbashree units that could nurture broiler chicken.1000 units will be started very soon and about 274 units are already prepared to launch.

The launch of the convergence programme of Kudumbashree and Animal Husbandry Department and the distribution of the revolving fund was inaugurated by Adv.K Raju, Minister of Animal Husbandry and Dairy Development, Government of Kerala.

The logo of ' Bhakshya Suraksha Bhavanam' programme was launched by Dr K.T Jaleel, Minister of Local Self Government Department, Government of Kerala. The programme envisages to cultivate the vegetables of one's own through Kudumbashree and NHGs. Seeds and training will be given to the common women who will become part of the programme. So far, 6 lakh families had received seeds and training for the same. 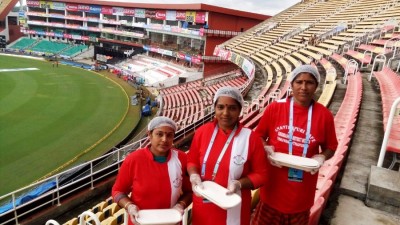 Cafe Kudumbashree stalls set up at Greenfield Stadium during T20 Cricket Match on 7 November 2017 won hearts. 40 counters were opened by Kudumbashree women at the venue under the leadership of 25 units from Trivandrum and other districts. 16 units were from Trivandrum and the rest from the districts like Kannur, Ernakulam, Kottayam, Alappuzha and kottayam. Cuisines from Travancore, Kochi and Malabar were served.The cafe Kudumbashree units offered snacks, fresh juice and steamed snacks. The food was cooked under the leadership of 150 women at the central kitchens set up at Sreekaryam and Kazhakoottam. The cuisines offered at the stalls were of high demand and it added more energy to the Cricket lovers. The activities of Kudumbashree School, which works aiming at the personality development and social, cultural, educational empowerment of women is progressing in all districts.

Kudumbashree School, the informal education programme which is executed coordinating with the NHGs envisages to improve the intellectual quality of common women. For this, information on different arena are given to them. Kudumbashree school enables the women to be aware of the need of social commitment and equip them to be part of the campaigns against alcohol and drugs.

Retired school teachers, experts from social, cultural and different other sectors are giving training to Kudumbashree women. In addition to this, 6 Resource persons are selected from every ward. That is, 1.19 lakh ward level teachers from 19854 wards had become part of this programme. Two hour training is being given to NHG women for a tenure of 6 weeks. Those who complete 12 hours of Kudumbashree School training will be given certificates.

Kudumbashree School will make the women aware of the different programmes executed by Kudumbashree in the state. Kudumbashree Mission not only aims at the social, financial and cultural empowerment but also at the intellectual empowerment as well. The programme also aims at retrieving the indigenous agricultural culture of Kerala. The 'Best Practices' Booklet compiled by Deen Dayal Upadhyaya Grameen Kaushalya Yojana (Kerala) was released by Mrs Alka Upadhyaya IAS, JS( Rural Skills), MoRD at the National Level Conference organised by Kudumbashree Mission associating with Ministry of Rural Development (MoRD) and Ministry of Shipping (MoS) to discuss the modalities for the Implementation of Sagarmala-DDUGKY Convergence project Phase II at Hotel Marriott, Kochi on 2 November 2017. The Booklet features the procedures that DDU-GKY Kerala Mission team came across and found to be effective during the implementation of DDU-GKY programme on Kerala. 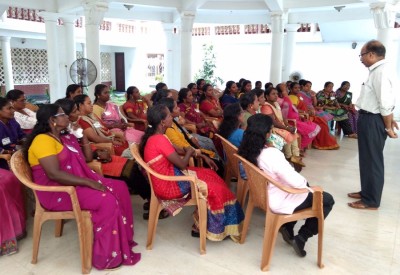 Kudumbashree women has been providing services in various sectors in Kochi Metro, the first all women run metro in the world. Till then, Kudumbashree women were considered only mediocre who were confined to the sectors like waste management, micro enterprises, exhibitions etc. Kudumbashree women had made a revolution in this regard by working with Kochi Metro. They are employed in Kochi Metro Rail Limited on different jobs like ticketing, house keeping, parking, gardening and customer care. The training programme was organised by Kudumbashree Metro Facility Management Centre which co-ordinates these jobs. National Level Conference organised by Kudumbashree Mission associating with Deen Dayal Upadhyaya Grameen Kaushalya Yojana (DDU-GKY) programme of Ministry of Rural Development (MoRD) and Ministry of Shipping (MoS) to discuss the modalities for the Implementation of Sagarmala-DDUGKY Convergence project was held at Hotel Marriott, Kochi on 2 November 2017. The project aims at skilling the coastal communities for wage employment in port and maritime sector. Sagarmala Programme is implemented by DDUGKY, the centrally designed programme which gives skill training to the rural youth of the country. Kudumbashree is the nodal agency of DDUGKY in Kerala.

The programme will be executed in Ernakulam and Kozhikode districts as part of the pilot study. Kerala submitted the action plan for giving training on the sectors like crane operation, electric arc welding, lifeguards fish and seafood processing, deep sea fishing etc for around 8000 job aspirants.

Exposure Visit to Warangal and Janagoan Updated On 2017-11-02 The women from the Kudumbashree Attappady tribal special project including the leaders of Ooru samithy, Panchayat samithy, Block samithy, Community Resource persons and Animators visited the Janagoan and Warangal District of Telangana state to learn about the women federations and its activities under National Rural livelihood Mission from 26 - 30 October 2017 . The team visited the District, Mandal and Village level federations and took keen interest in the various initiatives of the women federations of Telangana. The vision and the clarity of each members of the executive committee inspired the tribal women from Attappady.

The community based institution structure includes Self Help Groups, Village Organisations, Mandal Federation and District federation. The executive committee of each institution is managing different programmes under the institutions. Livelihoods are promoted by the organizations with the support of Community Investment Fund and now they are focusing on group initiatives. Federation of Persons with Disabilities is their yet another innovative initiative. One community care centre for the PWD is running for the care and protection of the persons who are suffering from various disabilities, managed by the village organisation which consists of doctors, counselors and mentors who provide expert guidance and treatment to the disabled people. The rights and entitlements of the persons are ensured and livelihood opportunities are offered to the family members of PWD.

The team made their visit to Model Villages as well, i.e., to the Pochannapet village of Bachanapet block, which is a completely digitalised village. CCTV camera, card reader for every transaction of villagers (cash less transaction) and digitalised system for purified drinking water (ATW) is the peculiar feature of the village. They are ensuring the basic needs of the families. The villages are 100% Open Defecation Free (ODF) and in every house have ground water regeneration pits. Gangadevipalli of Warangal District is another model village. The decentralization strategy of panchayat is amazing that they have 27 committees in different sectors having members from 12 to 17 which constitute 80% of the population. The planning and implementation of the projects are through these committees. All the members are involved in the decision making process.

The team visited the training institute, different livelihood activities of individual as well as groups and the women shared their experiences with each other and it became a memorable learning experience for the tribal women of Attappady and came back with a firm resolve to build better and sustainable community based institutions.

Sagarmala-DDUGKY Convergence Project is a collaborative effort by Ministry of Shipping (MoS) and Ministry of Rural Development (MoRD), which aims at skilling the coastal communities for wage employment in port and maritime sector. Ministry of Rural Development (MoRD) has assigned Kudumbashree Mission as the Nodal agency for the implementation of Sagarmala Project in Kerala. The process of implementation of Sagarmala DDUGKY Convergence Project Phase II has already been initiated by the Ministry. In this context, a meeting to discuss the modalities for the Implementation of Sagarmala-DDUGKY Convergence Project Phase is scheduled to be held at Hotel Marriott, Kochi at 9.30 AM on 2 November 2017.