As per the instructions of Ministry of Rural Development, each state is supposed to organise atleast 2 Saras Fairs an year. The 10 day long Saras Fair conducted by Kudumbashree Mission at Malappuram from 25 August 2017 to 3 September 2017, offering the best of traditional food and artistry has drawn massive crowds and drawn a sale of Rs 6 crore altogether.

Kudumbashree had also marked their presence at Saras Fairs held at Raipur, Bhilai (Chattisgarh), Ahmedabad (Gujarat), Kolkota (West Bengal), Goa and Indian International Trade Fair conducted at New Delhi. Kudumbashree had made a collection of Rs 32 Lakh from Saras fairs itself. A sale of Rs 5.63 Lakh was collected from Kerala Cultural and Trade Fair 2017 hosted organised by Information and Public Relations, Department of Kerala as part of the interstate information and public relations event held at Bengaluru.

Micro entrepreneurs from Kudumbashree are actively participating in the saras Fairs at Guwahati )(Assam), Gadag (Karnataka) and Patna( Bihar). Kudumbashree will soon mark their presence at the Saras Fairs scheduled to be held at Vishakhapatnam( Andhra Pradesh), Bhuvaneswar (Orissa), Jorethang ( Sikkim), Mumbai ( Maharashtra ), Margao (Goa), Thiruchirappally ( Tamil Nadu) and Ranchi (Jharkhand). Kudumbashree Women are participating in Saras Fair under the leadership of Micro Enterprise Consultants selected from the districts. 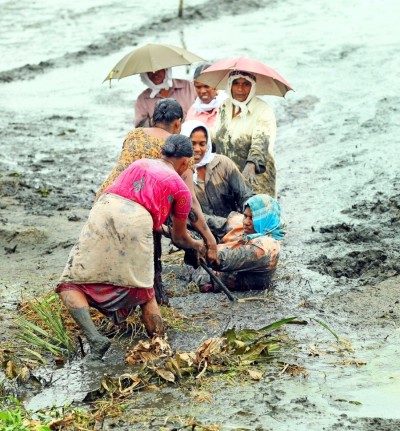 Rs 1000 each will be issued for 10 entries as consolation prizes. Free subscription of Kudumbashree Magazine will be given to selected 50 people. More details are published in the website www.kudumbashree.org

The contestants were directed to submit photographs that reflect the various activities of Kudumbashree Mission. 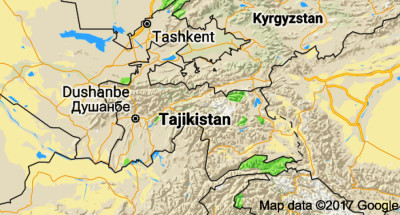 Tajikistan Delegation is visiting Kerala to study more about Kudumbashree Mission and its activities on 16 December 2017. The 10 membered delegation  include Ms.Jamilya Saidova, Deputy Minister of Agriculture Tajakistan, Mr.Abubakr Inomov, Minister of Justice,Tajikistan and other senior officials from various departments. Studying the Kudumbashree model of poverty alleviation, the delegation will spend  in Kerala till 22 December 2017.

The delegation will study from the experience of Kudumbashree programme with a view to explore replication of best practices in context of Tajikistan. Based on the interaction with the Kudumbashree officials, they would understand the approach of Kudumbashree Mission towards women empowerment and poverty alleviation in Kerala. They would understand the key elements  that has contributed to the scale and sustainability of the programme, the policy environment and the role of support institutions that had contributed to the growth of Kudumbashree. The delegation would closely analyze the intervention that Kudumbashree had made in Kerala for the last 20 years.

The delegation will make field visits and will interact with the beneficiaries who had harvested success through Kudumbashree Mission. They will also discuss the scope of replicating Kudumbashree model in Tajikistan context.

A 26 membered team from Afghanistan, Mangolia, Malavi, Kenya, Mozambia and Liberia had visited Kudumbashree during last March. As part of this, Kudumbashree was invited to Uganda for giving  training and a team from Kudumbashree had visited Uganda and gave training on 'Entrepreneurial development on agricultural sector' among rural women. 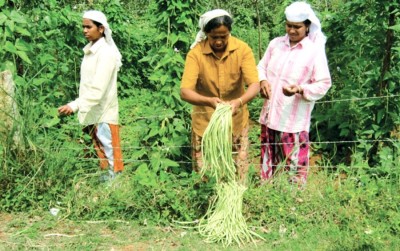 Kudumbashree Mission is joining hands with Kerala Grameen Bank for making avail the agriculture loans with concessions in interest for the Joint Liability Groups (JLG) who are engaged in group farming under the centrally sponsered programme,  Mahila Kisan Sashaktikaran Pariyojana (MKSP).

Associating with Kerala Grameen Bank, Kudumbashree Mission will organise camps across the state  for identifying the JLGs who haven't availed loans so far and offer loans for them. The first phase of the camp will be at Thrissur and Kazargode region from 18-21 December 2017 and the second phase at the remaining districts will be on January 2018.

51574 JLGs are pursuing farming 28563 hectres of land and so far Rs 310 Crore had been given as Bank loan. Kudumbashree  plans to make avail Rs 400 crore bank loan for the JLGs.

Banks give loan starting from Rs 1 lakh to JLGs for a financial year. Those who repay the loan in time are given special concessions. In fact, this become interest free loans then. 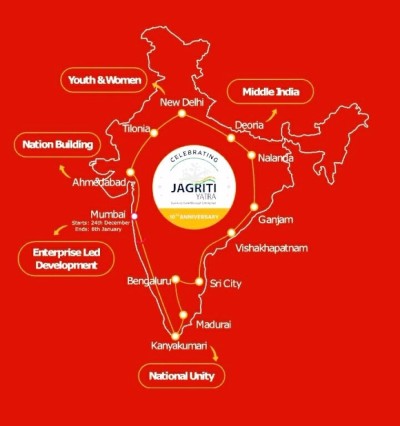 Nine Women from Kudumbashree are all set to join Jagriti Yatra, the 15-day long, national train journey that will take them 8000 kilometers across the length and breadth of India, to understand and build the India of smaller towns and villages through enterprise. Jagriti Yatra is set up under a non-profit charitable organisation Jagriti Sewa Sansthan, headquartered in Mumbai and based in Deoria, Uttar Pradesh focuses on skill-development. Three women from Ernakulam and six from Pathanamthitta will attend the Jagriti Yatra which will commence on 24 December 2017 from Mumbai and will end on 8 January 2018 at Mumbai. The trip will cover Mumbai, Kanyakumari, Madurai, Bangaluru, Sri city, Vishakhapatnam, Ganjam, Nalanda, Deoria, New Delhi, Tilonia and Ahmedabad.

During the journey, they will be offered opportunity to meet role models, change-makers and leaders who started out on a journey just like everyone else and made a difference to thousands of lives. That will help the women to forge bonds with the like-minded young leaders- their co-Yatris and complete strangers.They will be exposed to the role models who are building India through enterprises; through them the women will find inspiration to undertake their own building journey.

500 youngsters, selected from thousands of applicants, many from smaller towns and villages, join the Yatra every year, with the goal of creating awareness and start a movement of 'building India through enterprise'. Jagriti Yatra aims to nurture 1 Lakh entrepreneurs by 2022 and create 10 Lakh jobs in this process. The trip would be an unforgettable experience for the Kudumbashree Women. 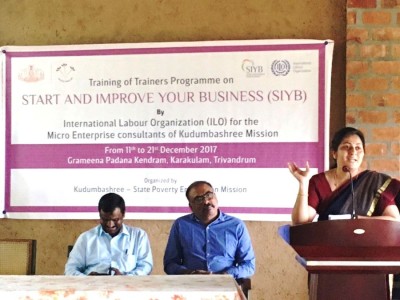 Start and Improve Your Business (SIYB) is currently the largest global business management training programme with the focus on starting and improving businesses as a strategy for creating more and better employment for women and men. It supports the sustainable development goals by promoting the business development policies that support decent job creation, entrepreneurship and encourage the growth of micro, small and medium enterprises.It also supports productive employment and decent work for all, including the youth and persons with disabilities. 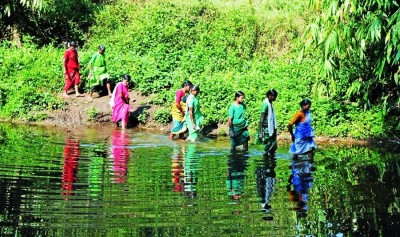 Initial activities have been started for launching women friendly study centres aiming at self reliance in Health, Agriculture, Job, Education, Savings etc. Resource persons for the same had been identified and training had been given to them. The women friendly study centres would address the issues like unemployment, malnutrition in children etc. 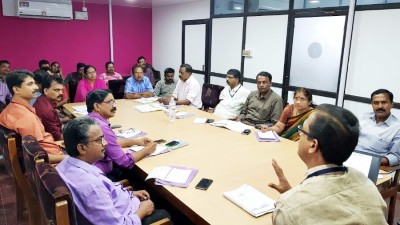 One Day Workshop for District Election Officers of the Kudumbashree Election 2018 was held at Kudumbashree State Mission on 11 December 2017. The Election officers who were selected by the concerned District Collectors were given classes on Kudumbashree Mission, Community Based Organization Structure and Kudumbashree Three-Tier framework, Kudumbashree NHG, ADS, CDS, Byelaw etc. 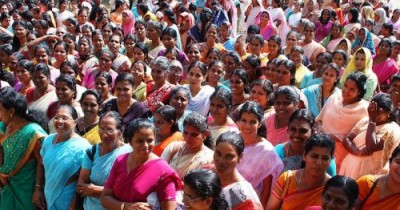 So far, 43 lakh members are there in 2.77 lakh NHGs altogether. There are 19854 ADS and 1073 CDSs . Each NHG would consist of 10-20 members. These members would select 5 office bearers among them through election method. The 5 membered office bearers in a particular ADS constitute ADS General Body. they will select the ADS Governing Body. The Governing Body of CDS comprises of one member from ADS.

After the elections, 13.85 lakh office bearers will take their charges. 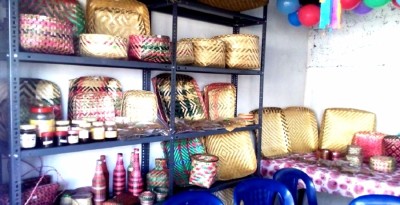 Idukki is the second largest district in the state with maximum number of tribals. Malayarayan, Mannaan, Muthuvan, Oorali, Paliyan, Hilpulayan, Malapandaram, Ullaadan & Malayan are the different clans of tribes who reside in the district. They were meeting their livelihood by selling the products collected from the forests. The tribals weren't getting enough payments for their hard work. It is for avoiding the delay in getting their payments that tribal outlets are opened.

40 NHG groups of Adimali, Kanjikuzhi, Kanthloor, Marayoor and Mangulam Panchayath were given training for starting sale outlets. The trained 4 membered group started 'Pulari' outlet at Venmani. Products made of Bamboo Products, Honey and Medicinal Plants are available in the outlets.The Non Timber Forest Products ( NTFP) of National Rural Livelihoods Mission (NRLM) is the main capital of these outlets. These tribal outlets are getting orders as they are located near Munnar and Idukki Dam.

It's also planned to start tribal outlets in Palakkad, Thrissur, Pathanamthitta and Wayanad Districts as well.