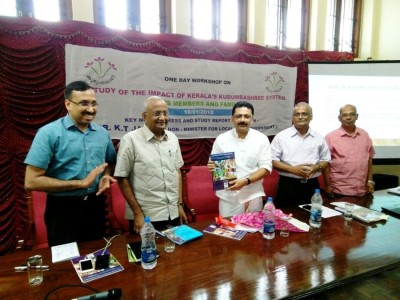 Study report on the impact of Kudumbashree Mission done by  Dr K.P Kannan, Chairman, Laurie Baker Centre for Habitat Studies and Shri.G. Raveendran, Retd. Additional Director General, Central Statistics Organization was released. The team was directed  to conduct a study on the impact of Kudumbashree Mission. Dr. K.P. Kannan handed over the the study report to Dr.K.T Jaleel, Minister, LSGD, Government of Kerala. The report was analysed by Shri.S.M Vijayanand, Former Chief Secretary, Government of Kerala.

It was founded out in the study that Kudumbashree's interventions had influenced the social development of the women. Minister said that the future projects of Kudumbashree would be framed based on the study reports and special care would be given to the deserving sectors.

The activities regarding the detailed study was initiated during July 2015. The social and financial  development brought in by the Kudumbashree Mission among the women was the topic. Within the time frame of two years, a detailed study was conducted in 350 NHGs from the selected 60 panchayaths in the state who had been actively participating in Kudumbashree activities for the last 10 years.

The survey  was conducted by differentiating them based on their financial situations.The representation of rural, urban, scheduled caste, scheduled tribes and special NHGs were included in the survey. The study was mainly aimed at the financial and social background of the NHG women, the improvement they attained through Kudumbashree activities, personality development, social abilities and its development, impact of the social  welfare activities among them etc. The number of NHGs had  steadily increased during these years and Kudumbashree's interventions had helped in improving the quality of life of them.

As per the survey, 55 % of the Kudumbashree women are under  Below Poverty Line and 45 % are Above Poverty Line. According to the report, Kudumbashree Mission had helped tnem to come to the mainstream knowing their own rights.

Papers were presented on 'Methodology  and findings on economic impact' & 'Social impact and policy recommendations by Dr. G.Raveendran and Dr.K.P Kannan respectively. 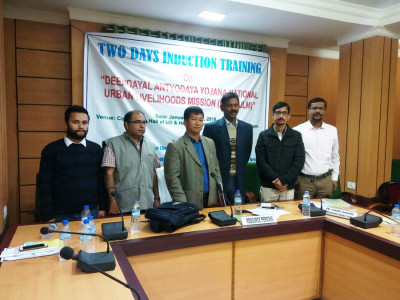 Kudumbashree trained the officials of Arunachal Pradesh, for the successful completion of National Urban Livelihood Mission (NULM) programme. A two day capacity building training was given to the officials regarding the same. The NULM project is being implemented by the Union government across the country since 2013 with the aim of alleviating urban poverty. Kudumbashree is the nodal agency of NULM in Kerala.

NULM programme would be implemented across the urban areas in the country. However in the north eastern states like Arunachal Pradesh, the programme is in its initial stage. Kerala was asked by the union government to help the other states in extending the NULM programme. The training was inaugurated by Shri. Taba Tadir, Chief Engineer cum Director Urban Development and Housing, Arunachal Pradesh on 11 January 2018. The senior officials from the District Urban Development Authority, engineers, community organisers, senior officials from the urban affairs directorate of Arunachal Pradesh also attended the training programme. The training was given by the three membered team led by Shri. Binu Francis, Programme Officer, Kudumbashree. 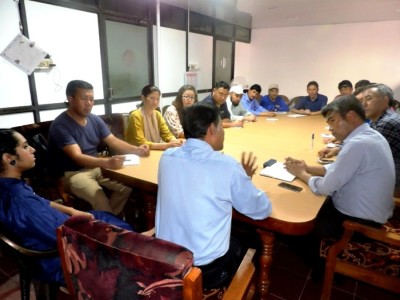 A 14-member delegation from Ladakh in Jammu and Kashmir visited Kerala to study Kudumbashree Mission. The team will study in detail about the successful implementation of the various projects of Kudumbashree in convergence with panchayaths, and Kudumbashree women’s micro enterprises. Led by Shri. Sering Paldan, Development Assistant Commissioner, the team from Ladakh comprises of Panchayath secretaries and one Block and Development Officer.

Classes on the topics such as Kudumbashree programmes, organisational structure, successful micro enterprises, group farming, social development, micro finance, skill training etc. were given to the Ladakh team. The team also visited the Thiruvananthapuram centre of Kerala Institute of Local Administration (KILA), to study about the decentralised governance implemented in Kerala.

Representatives from various states and countries had been visiting Kudumbashree to study about Kudumbashree model of poverty alleviation. The 10 membered delegation include ministers and other senior officials from various departments of Tajikistan had visited Kudumbashree Mission during December 2017. Snehatheeram Homestay of Kudumbashree women from Alappuzha made their mark by the outstanding performance in tourism sector in the district. The homestay is located near Perupalli Kochi Jetty at Arattupuzha. What makes them different from others is not only the 'All women management', but also the eco-friendly approach of them. The homestay started functioning on 5 June 2014, the environment day. The construction of the homestay is purely in an eco friendly way.

Foreigners are the main visitors of Snehatheeram homestay. Snehatheeram homestay serves ethnic food and uses only organic vegetables for cooking. Fish farm is also run by the Snehatheeram Kudumbashree unit. The ethnic food served by them is of high demand for the guests. The four day package of homestay include village walk, self boat riding, folk art-dance programmes, meeting with Ayurveda vaidyas, coir making, Mannarasala centre, visits to museum, Krishnapuram palace, village- community tourism, sunbath etc. Cigeratte, liquor and plastic are strictly banned inside the homestay. The Kudumbashree women themselves act as the local guides to the guests, overcoming the language barriers. Smt. Komalamma, Smt. Veena Devi, Smt. Ishi, Smt. Sunitha, Smt. Suraja, Smt. Chithra and Smt. Seema are the women who are in charge of Snehatheeram Homestay. 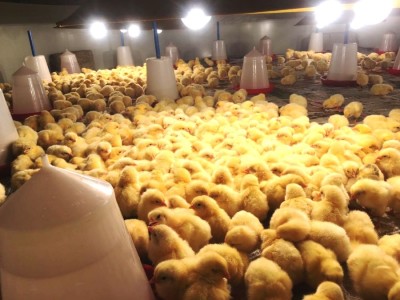 A total of 271 units started functioning across the state as part of of the Kerala Chicken Programme being implemented by Kudumbashree Mission in Kerala associating with State Animal Husbandry Department and Poultry Development Corporation (KEPCO). The first units were started in Thiruvananthapuram district on 22 December 2017. Ernakulam is the district with maximum number of units. i.e., 70 units. 42 units are there in Kazargode district. Kudumbashree Mission plans to start 5000 such chicken rearing units across the state.

Each unit is rearing at least 1000 chicken. They will be ready for sale on becoming 42-45 days old. KEPCO is distributing chicks in Thiruvananthapuram , Kollam and Pathanamthitta districts only. They were distributed in these districts at a rate of Rs 40 per chick. The mature chicken will be procured by KEPCO at a rate of Rs 85 per chicken.

In future, Animal Husbandry department will take actions to certify that the chicken is free from antibiotic or so. Kudumbashree mission also plans to start meat stalls in all districts except Thiruvananthapuram, Kollam and Pathanamthitta, which will be under the supervision of concerned CDS. 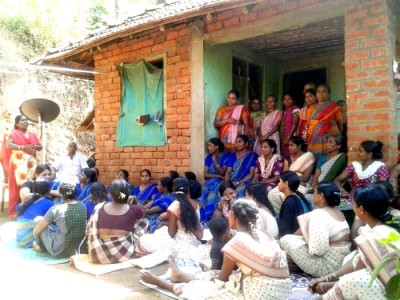 It is with the convergence with governmental and non governmental organisations that special tribal project was carried out by Kudumbashree. In the first phase, the programme was implemented in the selected 10 panchayaths of Idukki, Wayanad, Palakkad and Kasargod districts. The second phase was conducted in the selected 10 panchayaths of the remaining districts except Alappuzha. And in the third phase, it was extended to all panchayaths where tribals reside.

The Attappady special project is being carried out by Kudumbashree in Attappady from 2013 onwards for making progressive changes among the lives of tribals. Projects giving special emphasis to the areas like Edamalakkudy are the major ones among the tribal focused programmes. Tribal outlets were started for giving maximum exposure to the products of tribals in Idukki, the second largest district in the basis of tribal population. Group farming, PSC coaching etc are also progressing as part of he tribal special livelihood projects. The all-women management which provide online booking facility, has also made arrangements to accommodate women working on late night shifts. The counselling centre at the hostel which provide free counselling for women and children and the 'Railway tasty corner' food court which serve tasty food are also accessible to the public as well. Rail view is the fourth hostel started by Kudumbashree CDS. Smt. P.P Sheeja and Smt. V. Pushpalatha, Smt Savithri, officer bearers of Kozhikode Corporation Kudumbashree CDS North are in charge if the the 'Railview' Hostel.

The first in the series, 'Feminara' Womens Hostel was started at Gujarathi street in 2014, which was an instant hit. Following its success, 'Fly Sky' Hostel and 'She Homes' Hostel were started at Govindapuram and Parayancheri respectively.

The demand for women's hostels rise during entrance examinations and other tests. Kudumbashree hostels can accommodate around 300 people altogether in its four hostels. The hostels provide all the modern facilities for a comfortable stay in affordable price, had became a second home for its inhabitants.

Mobile crematorium for the landless Updated On 2018-01-06 To address the space shortage for funeral faced by landless people, Kudumbashree Unit from ward 1 of Idavetti Panchayath, Idukki launched the first of its kind initiative, Mobile Crematorium. The mobile crematorium was inaugurated on 22 December 2017, was launced under the leadership of Pratheeksha Yuvashree.The initiative aims to help the people to meet the funeral activities at low of cost.

Destitutes, Kudumbashree members and those families who deserve special care and attention may receive special considerations for availing the mobile crematorium services.

A Bank loan of Rs 5.5 lakh and innovation fund of Rs.3.5 lakh was availed from Kudumbashree for starting the same.

Just One Click Away : Kaushal Panjee App for DDU-GKY beneficiaries Updated On 2018-01-04 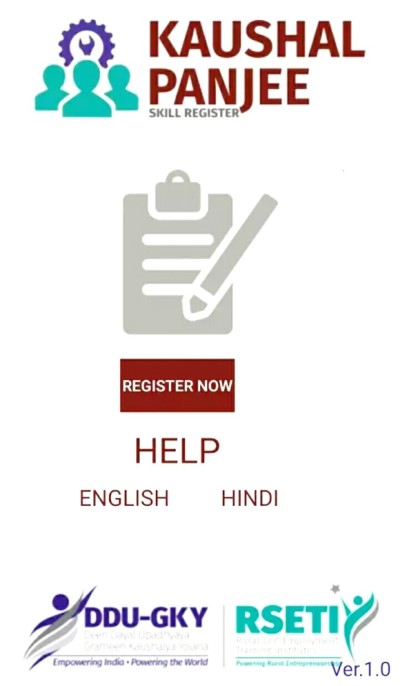 Kaushal Panjee App or Skill Register App aims to be the first step for any rural youth looking for getting skilled or starting a business through Deen Dayal Upadhaya Grameen Kaushalya Yojana (DDU-GKY). Through Kaushal Panjee, rural youth can register free of cost and be connected to training partners and banks working in collaboration with the Ministry of Rural Development.

The interested youth may register in DDU-GKY programme by logging on to www.kaushalpanjee.nic.in or by downloading the Kaushal Panjee from Google Play store. So far, 20,000 persons from Kerala had made their registration in DDU-GKY programme through Kaushal Panjee App. Through this app/ website, one may choose the course which would suit their aptitude. They may also choose under which Project Implementing Agencies (PIA), they may complete their skill training.

Under DDU-GKY, 45 Project Implementing Agencies are offering 103 different trades in 28 different sectors. So far, 27,000 students received job training out of which 15,000 got job placements. Kudumbashree is the Nodal Agency of DDU-GKY in Kerala. It was planned to give skill training to 51,200 students during 2016-19. Rs 393 crore was sanctioned for meeting the same. Considering the the best performance of Kudumbashree, an additional amount of Rs 198 Crore was sanctioned to give skill training to 20,000 rural youth during 2017-19. Kudumbashree had bagged the National Award for the Best Nodal Agency (2016-17) for the implementation of DDU-GKY programme. Mobilizing the right candidate through Kudumbashree community network resulted in successful implementation of DDU-GKY in the state. 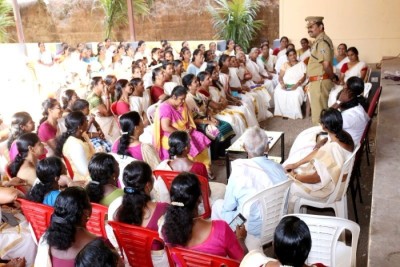 The aim of the initiative is not only to create safe neighborhoods but also to ensure the freedom of movement of women across the state and protect their rights, thereby creating better domestic and social conditions for them.The ward level vigilant groups will consist of five to ten resident members who would act as the team that would take measures against the atrocities against women. They will help identify victims and also provide them with legal and other assistance.

Monthly awareness programmes will be conducted under the leadership of community councilors. If needed, service of Gender Help Desk will also be provided. Vigilant groups will consist of ADS, CDS members, committee of Anganwadi mothers, Balasabha volunteers, elected members, NGOs, social activists and representatives from cultural arena etc. The support of women at a local level will be significant and it could play a critical role in helping the wheels of justice to turn faster and more efficiently.