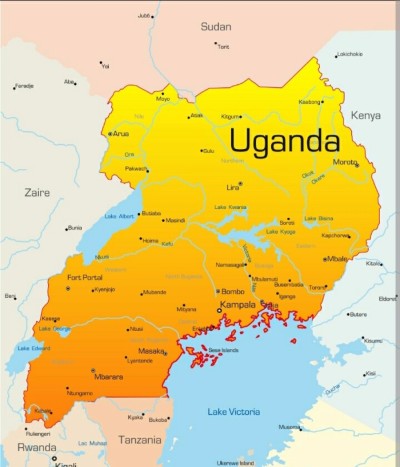 Kudumbashree received an invitation for giving training for women of uganda on the topic 'Entrepreneurship development in agriculture sector among rural women'. Kudumbashree had given 15 day training to 26 senior officials of agriculture, irrigation and animal husbandary departments of few african countries during March 2017. The training was conducted under the leadership of National Institute of Agriculture Extension Management, Hyderabad and U.S.Agency for International Development (USAID). It is in continuation with that training Kudumbashree officials are invited to Uganda.

A 26 member team from Liberia, Uganda, Ghana, Afganistan, Mongolia, Malawi, Kenya and Mosambia had visited Kerala as part of their training organised by National Institute of Agriculture Extension Management, Hyderabad and USAID. Kudumbashree had entrusted Kerala Institute of Local Administration (KILA) for giving training to this team. It's on getting motivated by the training received at Kerala, they invited Kudumbashree to Uganda. 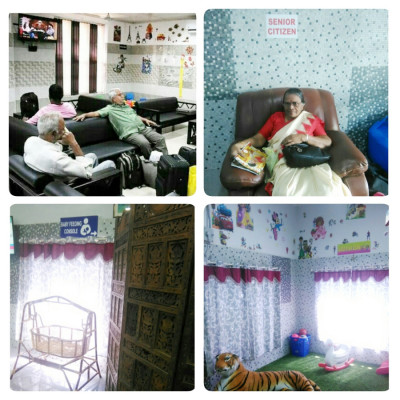 Restrooms opened by Kudumbashree at railway stations attract masses. The restrooms of Kudumbashree stands out unique because of the services they provide to the passengers. The air conditioned rest rooms that works 24 hours a day provides a comfortable halt to the travellers. Feeding console arranged for lactating mothers is one of the attractive feature of Kudumbashree Rooms. Kids area is also set up along with. Recliner sofa is made available for senior citizen. The travellers need to pay only Rs 25 per hour for availing these services.The staff of the rest room were trained under Deen Dayal Upadhyaya Grameen Kaushalya Yojana (DDUGKY) programme, which gives skill training to the rural youth in India. Kudumbashree rest rooms are opened at Thiruvananthapuram, Kollam, Ernakulam and Thrissur railway stations. The clean and safe rest rooms opened by Kudumbashree is a boon to the women passengers who travels alone. 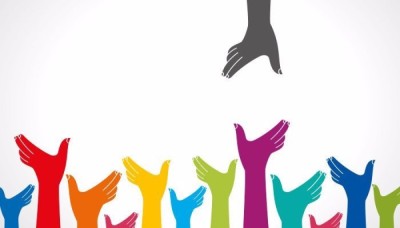 Kudumbashree is planning to appoint women advocates for ensuring free legal assistance for women and children who approach snehitha for help. Full time service of women advocates will be provided to the women who are in distress. It will be operational from 1st of January onwards.

The main aim of the centre is to provide help and support to those women and children who are in distress and facilitating them to access the service of other institutional agencies to address their issues. The Help Desk initiated by Kudumbashree Mission is working on the principle of convergence, which is followed by a close interface and collaboration with the registered service providers of the state. Presently Snehitha is working in 6 districts Ernakulam,Malappuram, Thiruvananthapuram, Idukki, palakkad and Wayanad and will be started in 14 districts soon. The preliminary works regarding this had already been started.

Snehitha gender help desk also acts as the district centre of the State Resource Centre for women which was recently opened in association with Social Justice Department. Snehitha was launched in 2013 and so far Snehitha Gender Help Desk had resolved 7000 cases from different districts. 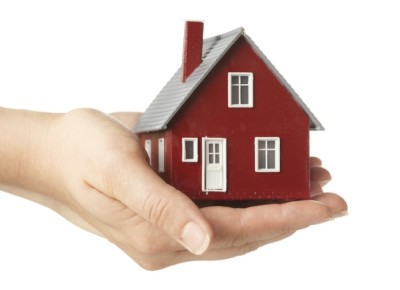 Projects of 8 Urban Local Bodies also get state wide approval as per the Pradhan Manthri Awas Yojana(PMAY) Programme, working under Central- State Ministries with the mission of achieving 'Housing for All' .Therefore projects for the housing of 1887 families in Panoor, Thalassery, Karunagapally, South Paravur, Kattappana, Nedumangad, Kalamassery and Perinthalmanna urban local bodies got approval. The work regarding this is in progress under 93 municipalities. The suggestion regarding this was put forward by the State Level Advisory Committee presided by Shri T.K Jose IAS, Principal Secretary, Local Self Government Department. Kudumbashree is the nodal agency of PMAY in Kerala.

A detailed list of the homeless in 93 urban local bodies will be submitted to central government before October 30. The project fund will be released as per the approval received.

The programme allows 3 lakh rupees for building Houses. One and half lakh rupees will be met from the Central Government fund. The rest will be met from the State Government and Local bodies fund. State government had already given approval for making 35050 houses. Rs 1050 Crore is the estimated amount for building these houses. Construction of 11073 houses had already been started and the construction of 178 houses had already been completed.

The programme is framed, including the factors such as Colony development, credit linked subsidy, affordable housing scheme and personal Construction.As per this years programme, 30000 houses will be finished. Kudumbashree aims to get approval for all plans for building houses this year itself. Therefore Houses for all who owns atleast one cent of land would be a reality then. 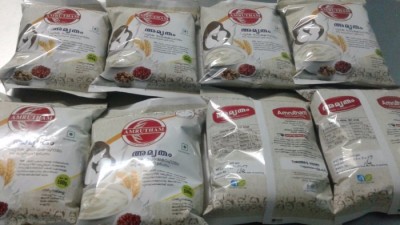 Kudumbashree's Nutrimix will soon be purchased by Child Fund India, a global child development organisation representing the voice of the deprived, excluded and vulnerable children in India, regardless of their race, creed and gender, for their Jhabua Centre located at MadhyaPradesh. As per the order, Kudumbashree will deliver 4050 Kg of Nutrimix to Child Fund India. The Nutrimix will be supplied to the children who are suffering from severe malnutrition there. It is for the first time that Kudumbashree is receiving an order from outside the state.

From 2006 onwards Kudumbashree is collaborating with the Social Welfare Department for the supply of Take Home Ration for Supplementary Nutrition to the 33000 ‘Anganwadis’ in the State. The Integrated Child Development Services (ICDS) provides the Supplementary Nutrition for children in the form of Take Home Ration (THR). 248 units are producing Nutrimix in the state.An average of 1300 metric tones of Nutrimix are distributed through the Anganavadis every month and has a turnover of Rs 93 crores. The Nutrimix powder was developed as per the directions of Integrated Child Development Services Programme.

Amrutham Nutrimix is the food supplement provided to the children of the age group of 6 months to 3 years. It comes in 500 grams packet. Wheat, Soya Chunks, Bengal gram, Groundnut and Sugar are the basic ingredients .

Nutrimix has enabled thousands of rural women to manufacture and supply the nutritional supplement to their children all across the state and from now onwards they are transcending boundaries to reach out to the children who are suffering from the issues of malnutrition.

Transcending Boundaries of Trade Updated On 2017-09-19 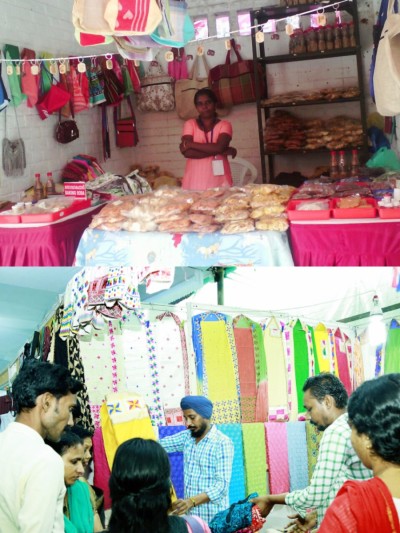 Following the success of the Saras Mela 2017 held at Malappuram, Kudumbashree Members took part in the Saras fair held at  Ahmedabad, Gujarath from 15 to 26 September 2017. A six member team from Kudumbashree joined the Saras Fair. There was a high demand for the products from Kerala. The people of Gujarat were offered a chance to taste the ethnic food and products of Kerala.

Receiving a warm welcome from Saras Fair held at Gujarat, Kudumbashree Mission is  planning  active participation in the Saras Fairs in other states. The Saras Mela 2017 held at Malappuram offering the best of traditional food and artistry had carved out a new era in the history by drawing huge crowds and making a record sale of Rs 6.5 crores.The Saras fair had played a major role in providing a unique platform for developing linkages between artisans and craftsman all around the country with buyers and customers. 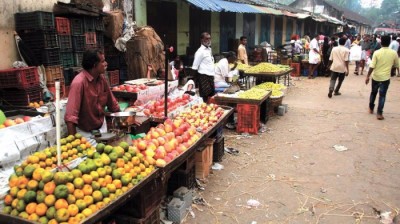 Identity cards will be issued to all eligible street vendors before 1 November 2017. Dr K.T Jaleel, Minister for Local Self Government Department will make the official announcement regarding the completion of the issuing of ID cards on the same day at Thiruvananthapuram Corporation. The eligible street vendors were found out from the survey conducted by National Urban Livelihood Mission (NULM) through Kudumbashree, the nodal agency in Kerala. Hence, Kerala became the first state in the country to issue Identity cards to street vendors. The suggestion was put forward by the State Level Advisory Committee presided by Dr K.T Jaleel, Minister for Local Self Government Department, called as per the guidelines of the Street Vendors (Protection of Livelihood and Regulation of Street Vending) Act, 2014.

NULM survey has been completed in every urban local bodies and the distribution of identity cards has been completed in 4 urban local bodies. After ID card distribution, license will be issued to the street vendors. Even though, 'No objection Certificate' from Public Works Department and National Highways Department are needed in this regard, license will be issued to those function according to the rules and regulations issued by Town Vending Committee. No hindrance should be created to the transportation as well as to the pedestrians, removal of the waste in street vendors own risks and the removal of the properties from the vending place as the sale is over are the regulations put forward them.

The guidelines for improving the quality of life of the street vendors are included in the programme. The training programmes for improving their skills are also included. Steps would also be taken to get them financial assistance from financial institutions. Shri T.K Jose IAS, Principal Secretary, Shri S.Harikishore IAS, Executive Director, Kudumbashree Mission, Smt. Haritha V Kumar IAS, Director, Urban Affairs, Smt.S.Nisha, Director, Kudumbashree Mission, representatitives from the urban local bodies, officers from the Planning Board, and Shri U.Pokker, Representative of the Street Vending Union attended the State Level advisory Committee Meeting.

The project for issuing Houses for those who have atleast one cent of land gets state wide approval in 9 urban local bodies. Therefore eveyone who own plots in urban local bodies will get houses of their own. The programme is implemented by Pradhan Manthra Awas Yojana Programme under Central- State Ministries working with the mission of achieving 'Housing for All'.

The work regarding this is in progress under 93 municipalities. Guruvayur, Kunnankulam,Ottapalam, Pala, Perumbavur,Chavakkad, Koothuparambu and Valancherry are the urban local bodies who submitted the plans and secured state wide approval for the same.

394 in Guruvayur, 258 in Kunnamkulam 426 in Ottappalam,14 in Pala , 64 in Perumbavoor, , 888 in Chavakkadu, 410 in Koothuparambu and 315 houses in Valancherry got approval. A detailed list of the homeless in 93 urban local bodies will be submitted to central government before December 31. The project fund will be released as per the approval received. Kudumbashree is the nodal agency of PMAY in Kerala.

The programme allows 3 lakh rupees for building Houses. One and half lakh rupees will be met from the Central Government fund. The rest will be met from the State Government and Local bodies fund. State government had already given approval for making 35050 houses. Rs 1050 Crore is the estimated amount for building these houses. Construction of 11073 houses had already been started.

The programme is framed, including the factors such as Colony development, credit linked subsidy, affordable housing scheme and personal Construction.As per this years programme, 30000 houses will be finished. Kudumbashree aims to get approval for all plans for building houses this year itself. Therefore Houses for all who owns atleast one cent of land would be a reality then.

The projects are aiming at the social and financial upliftment of women and children. Other than Self employment, apparel unit, women medical lab, plastic shredding units, Daycare homes for geriatrics, widow livelihood, tricycle for physically handicapped, continuing projects of nirbhaya, women friendly toilets, betterment of the facilities at buds schools are the few projects submitted by panchayaths.

It was based on the vulnerability Mapping conducted in 28 different panchayaths, livelihood programmes for women in agro-micro enterprise sectors were formulated.

Vulnerability Mapping was conducted in last November. Specially trained CDS chairpersons and Gender Resource persons collected the details for the survey. Surveys were conducted visiting houses, Schools and other institutions. The report on Vulnerability mapping was submitted to the concerned panchayaths. Its on the basis of this report that new projects were framed by the panchayath.

Kudumbashree to go International Updated On 2017-09-15 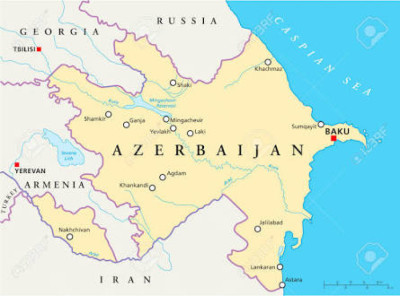 Kudumbashree received an invitation from Azarbaijan, the former republic of soviet for helping them to launch a Programme like Kudumbashree. The preliminary talks regarding this association has been started.

A team from Kudumbashree will visit Azarbaijan to study the present scenario prevailing there. A detailed report will be prepared after the visit. Government of Azarbaijan had shown interest in Kudumbashree's organizational structure as well in Micro Enterprises and Vulnerability studies.